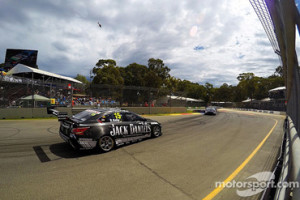 In the second of his exclusive columns, Motorsport.com’s resident V8 Supercar driver Rick Kelly talks about how he’d love to be able to race on home soil.

I was lucky enough to head to my home town of Mildura, to be the event ambassador for the Powercor Tour de Depot.
For those that don’t know, Mildura is in far north-west Victoria, a 4.5-hour drive from Adelaide and six hours from Melbourne.

It was pleasing to see the town get behind the event, and importantly also get behind the Lucas Foundation, with a total of $75,000 raised over the weekend. The Lucas Foundation was set up to support families in the Mildura area who are faced with unique situations where they have to travel to places like Melbourne to receive treatment for sick family members.

The ‘Tour’ featured a 20 kilometre time trail, and a 10 kilometre long community ride, which saw more than 150 riders hit the roads. It was great fun to get out on my Giant for a spin, and see so many people support a great cause.

I love going back to Mildura and spending time there; I head back there whenever I can throughout the year. Especially over the Christmas break, it’s the ideal place to go and recharge your batteries ahead of a busy season. The community itself was very supportive of my bother Todd and I in the early and mid-stages of our careers; a lot of local people still keep in touch with what we’re doing now in V8 Supercars, which is great. Personally, I want to give back as much as I can to the community that has been there for me, and the weekend was a good way to make that happen.

Motorsport in Mildura is a pretty big part of life, but the one thing that’s currently lacking is a road course for cars and motorcycles. Especially over the Easter break, there’s an awful lot of motorised action to take in. For starters there’s the Mildura 100 Ski Race, it’s commonly referred to as the world’s fastest ski race, held on the beautiful Murray River that runs past the town. We also have a motorcross event, we have drag racing, we have the Timmis Speedway and the Olympic Park speedways, which cater for bikes and cars. There’s also a pretty cool go kart track. So it’s a big part of people’s lives, and there has long been talk about setting up a proper circuit racing facility.

Perfect place for a race

I think having a permanent facility in Mildura would be fantastic; a lot of the tracks around Australia are solidly booked out, particularly in the metro areas, with come-and-drive opportunities being fuelled by gift certificate websites. Manufactures are constantly testing and showcasing their cars at tracks, and there is a lot of club level racing being held nearly every weekend. The hard thing in rural areas is having facilities that stack up commercially, which is always a sticking point. Race tracks cost a lot of money, and you need to have a guaranteed income to allow them to survive, and that’s always the tough bit.

The start-up cost of a race track is always the thing that stops a lot of projects in their tracks, but places like Winton, Wakefield Park, and even Morgan Park in Queensland continue to thrive in rural locations. They are a great drawcard for the surrounding towns, as the local accommodation always fill up during events, and if you host worthwhile meets, country folk don’t mind travelling long distances to be trackside. When you look at the V8 Supercars calendar, some of our biggest events are in places like Darwin and Townsville, which don’t have a massive local catchment of fans, but they are massive attractions for the region.

I think from my point of view, a race track in Mildura would be outstanding, and I would love to see more permanent tracks around the country get built. “Race tracks cost a lot of money, and you need to have a guaranteed income to allow them to survive, and that’s always the tough bit.” – Rick Kelly

There’s certainly a few on the drawing board, work is already kicking off on the new facility at Tailem Bend in South Australia, which by all reports is shaping up to be a great facility. The more quality venues we have in different corners of the country, the more opportunities people will have to race, which can only be a good thing for the health of the sport as a whole.

I think with Mildura’s motorsport culture, if they build it, they will come.