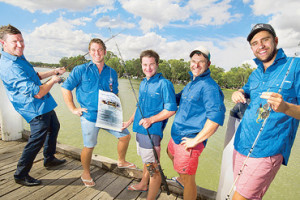 Anglers raised more than $1000 for the Lucas Foundation at the Stress Less Fishing Classic in Nangiloc on March of 2016.

Fishing enthusiasts converged on the Murray from across the region and interstate for the second running of the event, which saw participant numbers increase by 70 on last year.

Co-founder Braeden Lampard said the fish weren’t biting as much as had been expected but the event’s Saturday night festivities received good feedback from anglers.