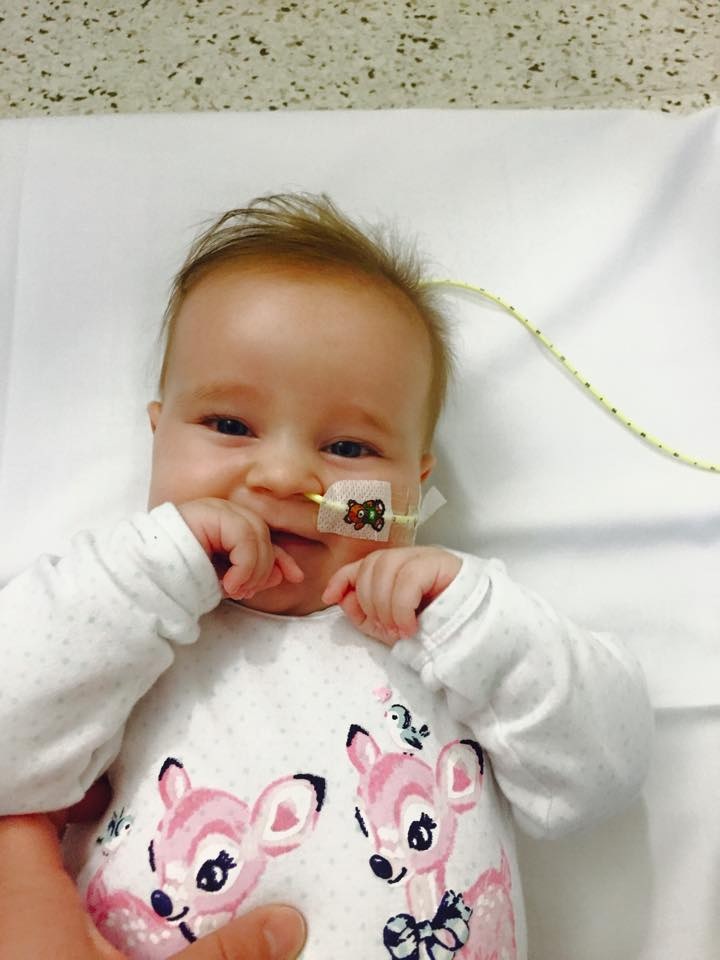 Rosies first symptoms started on the Monday afternoon when Chelsea noticed she had lost her sucking reflex. She went to the doctors who informed us she had thrush on the back of her throat and to go home and try and syringe feed her, which was unsuccessful. Chelsea took Rosie to ED where they were admitted and from there had doctors trying to figure out what was wrong. Over the next few days she got progressively worse to the point she was struggling to breath and even move. Rosie was airlifted out of Mildura via the PETS retrieval team at the Royal Children’s Hospital, Melbourne. This was the most scariest time for us as they had originally told us she may have had Encephalitis, and were unsure  of her  brain function.

The flight down for me was horrible, not knowing what was happening or how she was. We had brilliant support from family and friends who took care of our 2 older children, Daisy and Mackie, and new puppy Maggie. For the next week, Rosie went through test after test, scan after scan to try and find a diagnosis. We were so lucky to have a great team of doctors on our team, and they worked extremely hard and quickly to get a diagnosis. Over the first few days they were able to rule out any damage to the brain but were worried about possible seizure activity. In the meantime Chelsea and I were able to stay at the emergency accommodation inside the hospital, which made it easier for Chelsea to be with Rosie whilst expressing.

Going back to that small room each night was extremely difficult. Usually bedtime meant tantrums, food everywhere, bath time, and trying to keep the kids in their own beds!! But now it was quiet and calm – time to miss the kids, time to plan the next day, time to think of how the kids were. Chelsea and I are real home bodies, creatures of habit I suppose. We love being at home together with everyone around, the first week was probably the toughest.

On day 11, after her first symptoms were shown we had a diagnosis which we have been sweating on for days. Trevor Juke, our amazing doctor, informed us that Rosie has contracted Infantile botulism. Whilst it was great to finally have some answers, it was extremely confronting to hear. Knowing the journey we had in front was daunting but we knew we had to stay strong for our little girl and also our family. The way the doctors were able to get the Baby BIG, an anti toxin used to fight Botulism, so quick from the US was amazing. Being able to get through all the politics and paperwork and get it into Rosie, is part of the reason she has shown great signs of recovery very early.

I remember lying in our bed that night, still in a bit of shock saying `Can you  believe this has happened to us` It was the same night we received a call from Bree Whitelegg, mother of Lucas, to offer her support to us. This was an amazing phone call and filled us with hope that even though things will get tough, there is a light at the end of the tunnel. It was on this night that Chelsea and I made a pact – to control what we can control and not worry about what we cant.

Chelsea has remained with Rosie from the time she first got sick until now. She has been amazingly strong and resilient. Andrew Whitelegg told me when I met him for the first time. `This only happens to people who are strong enough to get through it` Rosie has surprised me with her strength and courage for such a little girl and Chelsea has been just as strong and courageous fighting with her every step of the way.

I have been back and forward between Melbourne and Mildura and wouldn’t have it any other way. Ive got to spend quality time with Daisy and Mackie as well as supporting Rosie and Chelsea where I can.

The messages of support from our family, friends and the Sunraysia community was unbelievable. There was offers of babysitters, dog sitters, cleaning the house, money, flights, fuel and in general to let us know that we were in their thoughts. All of those things helped us stay strong and do the best thing for our kids. To know we had that support aswell as the financial support of the Lucas Foundation made one less worry for our family. The Ronald McDonald house was our home away from home when the kids I were in Melbourne. They love `Ronalds House` and met a number of new friends and would always ask how their brother or sister was doing that day.

The whole journey has been a rollercoaster with lots of lows but the highs certainly outweigh those. We know Rosie is going to make a full recovery and as a family we will be back together, which I will be forever grateful for.