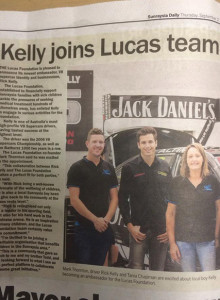 The Lucas Foundation, established to financially support Sunraysia families with sick children tackle the pressures of seeking medical treatment hundreds of kilometres away, has enlisted Kelly to engage in various activities for the Foundation.
Kelly is one of Australia’s most high-profile V8 Supercars drivers. Having tasted success at the highest level.

The driver won the 2006 V8 Supercars Championship, as well as the Bathurst 1000 two years in a row.

The Lucas foundation co-founder Mark Thornton said he was excited by the appointment.
“This collaboration between Rick Kelly and The Lucas Foundation makes a perfect fit for both parties,” he said.

“With Rick being a well-known advocate of the wellbeing of children, he is also a local Sunraysia boy keen to give back to his community at the grass roots level.”

“Rick is recognised not only as a leader in his sporting field but also for his hard work in the business arena. He is an inspiration to many children, and the Lucas Foundation team certainly value this commitment.”

“This is a community that gave so much to me and my brother Todd, and I’m looking forward to what I see as the perfect platform to collaborate on some great initiatives.”