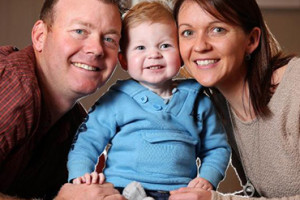 Lucas Whitelegg, spent 241 days paralysed by a rare and potentially fatal illness. He has finally started crawling. The brave battler was struck by a potentially deadly illness at just nine weeks old, rendering him paralysed for 241 days by a Botox-like poison. But he’s now home, happy, and has even started crawling, a milestone parents Bree and Andrew never dared dream would happen.

His mother Ms Bailey was based in ­Melbourne alone and did not leave Lucas’s side, spending most of the year away from her support network and husband who could not afford to give up his job in Mildura. During this time Andrew travelled 30,000km, commuting between Mildura and ­Melbourne. Eventually Lucas’s movement returned, and for the first time last month, at 17 months old, he began to crawl.

“We waited so long for these milestones so when you finally see them, they blow you away with excitement and happiness,’’ his mother Bree Bailey said. “To know what he’s come from to where he is now is incredible.’’

When the illness first struck, Lucas stopped breathing and was put on a ventilator. It took weeks for him to open his eyes, and three months before he smiled when his mum sang a special song. It was eight months before he was able to breathe on his own, and, in January, he let out his first giggle.

Lucas still has internal problems and is fed through a tube, but his parents are hopeful he will recover fully in time. Lucas is one of only a handful of Victorian botulism cases in the last five years, with doctors turning to the US for a $100,000 antitoxin. Bree and Andrew want to help other families who go through similar challenges in the Sunraysia area and last month launched the Lucas Foundation. It aims to give ­assistance of up to $10,000 to help with costs like accommodation and travel.

Lucas’ story went national in 2014 and many dug deep to help the family during their time of need. They struggled financially, as Ms Bailey remained by Lucas’ side at the Monash Children’s Hospital while father Andrew continued to work back home in Mildura. About $125,000 was raised for the family and, as a way of saying thank you, Ms Bailey started The Lucas Foundation.

Bree has been nominated for a Pride of Australia Courage medal, for launching the Lucas Foundation to help support other families in a similar position.