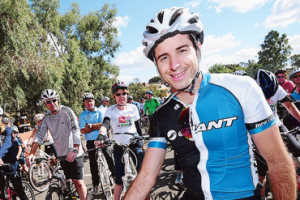 The Lucas Foundation can provide greater support to local families in need through funds raised at the Powercore Tour de Depot. The event featured two bike rides – a com­petitive, timed 20km race and a 10km fun ride – amid a day of family entertainment at a ­community festival in Jaycee Park. The Powercor Tour de Depot followed a ­Powercor charity golf day at Mildura Golf Resort on April 10, which also raised money for the Lucas Foundation.

30 competitors took part in the timed-event, with 17 year old Tyler Beruldsen taking out top honours with a time of 29 minutes and 21 seconds.

Powercor presented the foundation with a cheque for $75,000 raised across both events. The Lucas Foundation aims to provide finan­cial assistance and ease the burden faced by ­families with sick children living in Sunraysia.

Co-founder and spokesman Mark Thornton said it was “quite an emotional feeling”  to be handed a cheque for that amount. “It’s amazing. We never expected that sort of money and it’s been the culmination of a lot of work by Powercor and the companies they ­employ to put this event together,” he said.

The foundation has now raised $165,000 in 10 months, including the donation at the Powercor Tour de Depot.