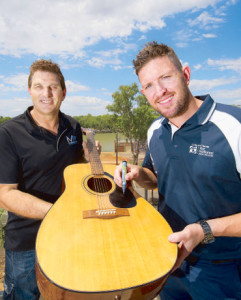 MUSIC lovers have the chance to take home a guitar signed by the bands headlining River Rockfest to raise funds for the Lucas Foundation.

Mental As Anything, Choirboys, Pseudo Echo and Taxiride will put marker pen to the acoustic guitar, which will be raffled on the night of the November 28 event.

The Lucas Foundation helps Sunraysia families suffering financial hardship due to unforeseen circumstances or illness affecting their children. The foundation’s co-founder Mark Thornton said it was great to receive such support from organisations and businesses in the region.

“Obviously any money raised through this guitar will go to a good cause and we’re delighted David has thought of us as his chosen charity for this year,” he said.

The inaugural River Rockfest held on January of 2015 raised about $4500 for Chances for Children through the same initiative, combined with the auctioning of a second guitar donated by Diesel at that event after his performance.